To Grow Wealthy, You Better Understand The Power Of Compounding

Understand this, and you have taken the biggest step to financial freedom. The younger you are when you do, the more power you will have to achieve your dreams.

The United States has recognized April as Financial Literacy Month since 2003. That's an idea the UK could do with too, so to do my bit, I'm going to focus this post on a simple concept - it may be simple but it's the most powerful concept there is in growing your money.

Before we begin here's a quick test:

Suppose you had £1,000 in a savings account and the interest rate was 2% per year. After five years, how much do you think you would have in the account if you left the money to grow?

So before we answer the question. What is the magic concept that is so worth understanding?

The Power Of Compounding 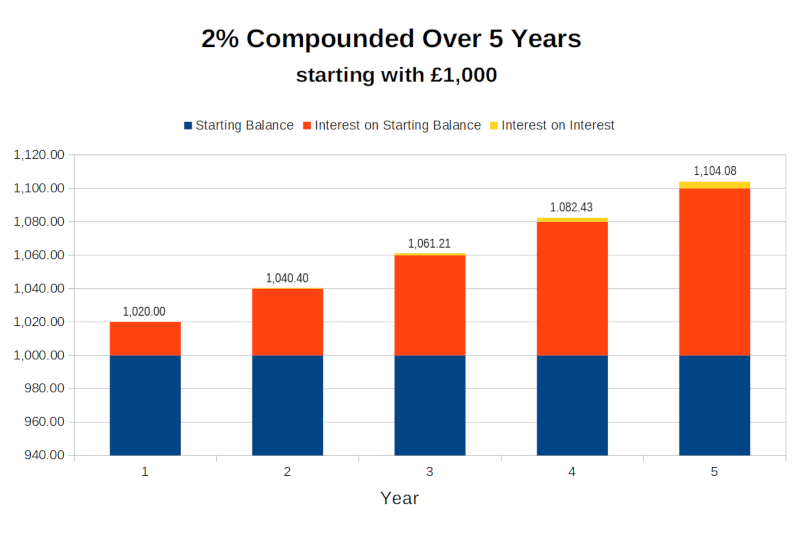 "Whoo hoo" I can hear you say. That extra return of £4.10 over 5 years may seem about as significant as a flea on an elephant's back. Why should we even care?

Let's look at what happens when we invest £1000 for 30 years - which for many of us is about the amount of time between when we first start saving for retirement and when we actually retire - at an annualised return of 10%. 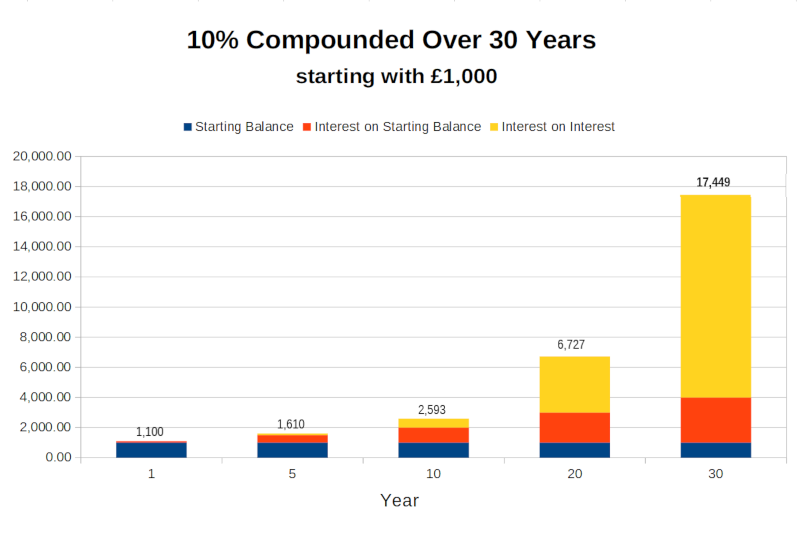 With the same rate of interest, but no compounding, i.e. ignoring the yellow 'interest on interest': over 30 years we'd end with £4,000. But with compound interest we end with £17,449. We'd be over four times as wealthy - and that's without adding more savings in between.

When Albert Einstein was asked what he considered to be the most powerful force in the universe, he answered: "Compound interest!"

So the (yellow) flea has now grown a lot bigger than the (blue) elephant it was riding on. No wonder Albert was excited.

There's a mental shortcut you can use to work out how quickly compound interest will double your money at any given interest rate - the 'Rule of 72'. Just divide 72 by the interest rate, and that's your answer. For example:

That's why most people who invest for the long term are a lot wealthier than those who leave it in the bank.

Compounding Works In Reverse Too

Compounding builds your savings, but it works in reverse on any debt you have. You have to pay interest on debt, and it too compounds. So what happens to that £3,000 credit card bill if you don't pay it off, and your credit card company charges the normal 18% interest?

We can use the Rule of 72 to work out that your debt will double in around 4 years. Yikes!

That is why, if you are in debt, the very first thing you should start paying off is the thing with the highest interest - normally your credit card.

And the best advice for most of us. Don't go into debt, or buy things on credit (with the exception of a mortgage on property).

Increasing Time and Return Has A Multiplying Effect

We have learned that increasing the amount of time enormously increases your final wealth. Increasing the rate of return obviously does too. Put them both together, and you have come near to the Holy Grail of investing.

It was a chart similar to this one that made me decide to give up the corporate world fifteen years ago, when I realised that my time would be more efficiently spent dividing it between learning how to get better returns, and doing a job I enjoy, instead of grinding away at a dull job until retirement.

Look at that table carefully.

By increasing your returns by 4% (e.g. from 2% to 6%, or 6% to 10% - it doesn't matter what you increase it from), after 30 years you have three times as much money. And increasing returns by 4% is easily achievable. My new website showing you how is almost ready.

Here's another thought. You buy a car and choose to spend £1,000 on that 'extra' (paint job? alloy wheels?) when you're 30 years old - always nice to impress people, isn't it? - but if you forego the paint job and invest the £1,000 instead, assuming a fairly average 7% return, you'd have £7,612 more when you retire at 60. Or perhaps you could retire a little before 60? Save on a few frivilous items (or work to earn a bit more earlier in your career), and perhaps you could retire a lot before 60.

So what are the take aways today?

Given this compounding superpower at your disposal, it's worth taking five minutes to think about any easy changes you can make now to give you a better lifestyle in the future.